Marshall and Warren, Burry, Markopolis, Amis: What do These Men Have In Common? 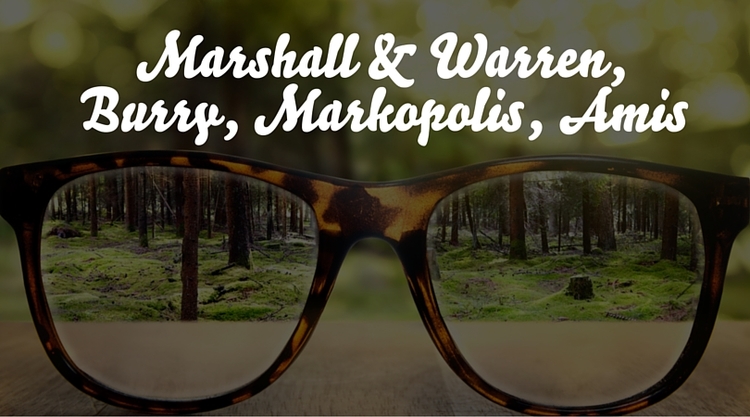 Each of them professed a disruptive message about an “undetectable,” serious problem and very few people listened to them. Each one was perceived as being wrong, bordering on a bit crazy until they were proved to be right.

Except for me (Amis).

Oh, I am correct in saying that equinus is responsible for greater than 65% of all non-traumatic acquired foot and ankle pathology. And I am correct that the human calf can, in the great majority of these cases, be stretched out to its original, intended length.

In each case – Marshall and Warren, Burry, Markopolis and I – there was ongoing damage – that is, while peers and people scoffed – and in the end, the damage was done. This was especially the case in Burry’s situation, which was devastating . . . and at least partially preventable.

So who were these dissenting voices?

Internist Barry Marshall and pathologist Robin Warren challenged the status quo way of thinking about gastric or stomach ulcers. In their lab, they had discovered antibiotics could in fact be the cure for these ulcers, but the “mainstream” wanted to hold on to how ulcers must be caused by stress.

The so-called “medical elite” didn’t want it to be any other way, and met the discovery with skepticism. But they were wrong. After Marshall ran the experiment on himself – with nothing else to use for his studies to prove to all those refusing to believe – he was ultimately able to show he did have the bacteria called Helicobacter pylori in his gut. (Later, in 2005 they won the Nobel Prize for medicine.)

Quoting Dr. Barry Marshall
“I presented that work at the annual meeting of the Royal Australasian College of Physicians in Perth. That was my first experience of people being totally skeptical. To gastroenterologists, the concept of a germ causing ulcers was like saying that the Earth is flat. After that I realized my paper was going to have difficulty being accepted. You think, ‘It’s science; it’s got to be accepted.’ But it’s not an absolute given. The idea was too weird.”

After starting his own hedge fund, Burry’s research and unique way of paying attention to detail gave him an idea to bet against what he saw as a housing bubble, thanks to more and more mortgages being offered to people with weak credit. He took advantage of buying credit default swaps on subprime mortgage bonds and profited handsomely. He and others would have done much better if they would have believed his crazy “theory”.

Putting his reputation on the line, at one point he suffered an investor revolt – though his predictions about the real estate bubble collapse did come true.

Quoting Dr. Burry
Written off by the banks (and Wall Street), which is how he was able to bet against them, he later replied to Alan Greenspan, who said this: “Everybody missed it…academia, the Federal Reserve, all regulators.”

Burry wrote, in reply to Greenspan, that this was untrue, but that no one had believed him. “Back in 2005 and 2006, I argued as forcefully as I could, in letters to clients of my investment firm, Scion Capital, that the mortgage market would melt down in the second half of 2007, causing substantial damage to the economy. My prediction was based on my research into the residential mortgage market and mortgage-backed securities…”

As early as 1999, Markopolis had evidence that Madoff’s multi-billion investment business was a fraud. He knew that a return stream that Madoff was claiming to have was just too good to be true.

Markopolis boldly warned the SEC, more than once of the Madoff fraud, all of which fell on deaf ears – until he was right. (The press also ignored tips from other watchdogs and analysts.) Again we all know how that one ended.

Quoting Harry Markopolos
“I told the SEC exactly where to look, providing them with a long series of clear warnings that any trained investment professional would’ve immediately understood. Inexplicably, the SEC never acted upon those repeated multiple warnings over a nine-year time span… My team and I kept collecting additional information, and I kept sending it to the SEC, and they kept ignoring it.”

After seeing thousands of patients and with all the procedures performed, it has become clear that much of what is considered “standard operating procedure” for the medical profession when it comes to the majority of non-acquired foot and ankle ailments – is wrong. Focused on his patients (and those that he will never be able to reach, in-person), Amis’ objective is to help the majority of people know that the real problem they are having is in their calves, rather than the foot, where the symptoms often appear.

Even his closest colleagues are not believers in this disruptive concept for which he is often marginalized. This standard of care, instead, still consists of orthotics, injections, surgery, and many more treatments incorrectly targeted at the obvious foot or ankle problem and not at the underlying cause: equinus (calves that are too tight).

Quoting Dr. James Amis
“More than 60 percent of my patients, for more than 25 years, have come to me with non-traumatic acquired foot and ankle pathology such as plantar fasciitis, posterior tibialis tendon dysfunction, and midfoot arthritis. They have failed using these standard unsatisfactory palliative solutions. There is no doubt that their quality of life has been significantly affected, in some cases destroyed. I tell them that the problem is not in their foot, it is in their calf. Calf stretching is what I call ‘powerful medicine, definitive treatment,’ because it is just that simple for the majority of my patients. It’s not a quick fix, but it’s the sustainable solution to their problems – and it is the preventative route for the majority of foot and ankle problems not caused by an injury.”

There is More to the Gastrocnemius Than Meets the Eye