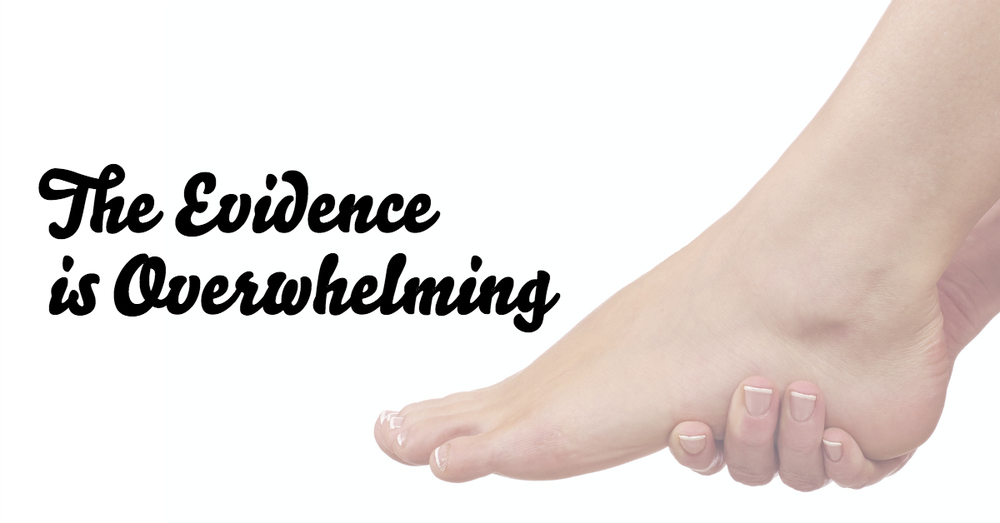 Finally, the human calf is rightly becoming the prime suspect as THE cause of the majority of non-traumatic acquired foot and ankle pathology.

In my paper, “Gastrocnemius: A New Paradigm for the Human Foot and Ankle,” I explain why our calves get too tight, describing four categories that lead to the gastrocnemius contracture: activity changes, physiologic changes in muscles and tendons, genetics, and reverse evolution.

A special thanks to Dr. Patrick DeHeer for his recognition of this in a recent “Podiatry Today” article, “The discussion on equinus has barely scratched the surface,” citing evidence published in the December 2014, journal Foot and Ankle Clinics of North America edition titled, “The Gastrocnemius.”

Deheer, who has been a huge advocate of subtle equinus causing many foot and ankle problems, points out that the issue’s 13 articles are all related to equinius: “Our orthopedic foot and ankle colleagues believe that equinus is a topic requiring significantly more discussion,” explains Dr. DeHeer.

I couldn’t agree more, which is why I share the four factors that lead to gastrocnemius contracture. One can not be convinced to stretch until they understand that the human calf indeed does shorten as we age, and why.

First, there is a generalized decrease in activity we see with aging, and as a result the desired muscle-tendon unit maximum (or optimal) length is not being achieved on a regular basis. This is a slower, gradual process.

Although preventable, as we age, the gastrocsoleus complex shortens, as over time, our soft tissue contracts to the shortest position possible. Physiologically, there is an increasing cross-linking of collagen fibers, connective tissues become less compliant, and there is a decreasing amount of elastin in soft tissue. “All of this causes contracture of the muscle-tendon unit,” agrees Dr. DeHeer, as he discusses in the paper.

Second, bed rest from a surgery or injury or illness also leads to contracture of the gastrocsoleus complex. Due to the Law of Davis, this sudden reduction in activity results in a more rapid and recent equinus contracture.

Third, we see gastrocnemius contracture in athletes who have a shortening of the calf over time thanks to repetitive motions, such as distance running, when the knee does not fully extend while dorsiflexing the foot, occurring over and over again, and in time the gastrocnemius adapts to become shorter.

Notice that the only time the knee extends in these runners is when the ankle is plantar flexed (pointed down), thus the gastrocnemius never reaches its maximal length, mile after mile.

What could possibly be the part that excites (or fascinates) people the most is the fourth category, reverse evolution.

About 2.2 million years ago, we transformed from quadrupeds to bipeds, certain muscles had to lengthen (hip flexors, hamstrings, gastrocsoleus complex) and others had to shorten (quadriceps, tibialis anterior).

Because these muscle groups adapted later in the evolutionary process, they are the first to move backward and tighten as a person ages, reverting to their former positions. This is called a predilection pattern, leading to many problems with the calves and the hamstrings.

The evidence is simply overwhelming: isolated gastrocnemius contracture is the common denominator that leads to many of the human non-traumatic foot and ankle problems.

To add to this point, calf tightness if the common source of a majority of acquired, non-traumatic adult foot and ankle problems, including plantar fasciitis, non-traumatic midfoot osteoarthritis, insertional Achilles tendinosis, posterior tibialis tendon dysfunction, and Achilles tendinitis, and many more.

In DeHeer’s well-written article, he also poses a worthy question: “The contracting nature of our gastrocsoleus complex with age produces a pathological event that over time results in secondary pathologies. Should we not consider intervention once the patient has a primary pathological event before secondary changes occur?” What Dr. DeHeer is so wisely alluding to is that early detection can preclude these problems in the foot and ankle, in most cases.

My hat is off to my esteemed colleague, Dr. Patrick DeHeer and his tireless devotion to the recognition of the isolated gastrocnemius contracture and the damage it causes every day. He shows the sincere desire to help people take care of their feet and entire health.

We will both continue to work to shed light on the isolated gastrocnemius contracture and the implications it has on people’s quality of life. It’s time we focus our energy on fixing the source of the problem, not the obvious symptoms. I am certain that Dr. DeHeer would agree that if you are not focused on addressing the gastrocnemius contracture, then you are not treating the problem.

Excerpts from this blog originally appeared on Podiatry Today at: http://www.podiatrytoday.com/blogged/delving-deeper-isolated-gastrocnemius-contracture#sthash.8Yn7uAeh.dpuf

Looking for more on how tight calves lead to a great majority of nontraumatic adult foot and ankle problems?

Check back in soon to read the my next article, The Split Second Effect: a new paradigm in the human foot and ankle, and to see exactly how subtle equinus or isolated gastrocnemius contracture causes so many foot and ankle problems. This article WILL change everything. You can also subscribe to our blog to have it delivered to your inbox so you never miss an update.